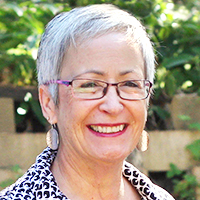 After completing Biblical Studies at the Baptist Theological College of Queensland, Cathy joined Operation Mobilisation and served in Ireland where she was involved in a church planting team. She went on to join Interserve in 1986 in response to God’s call to ministry with women who live under Islam. This has provided a focus to her last thirty years of ministry in mission. She is passionate about women and change, particularly how the transforming power of the Kingdom of God, expressed in the message of the gospel, is foundational to challenging the structures that mediate Muslim women’s lives.

Working in Pakistan, Cathy was involved in education, returning there after some time in Egypt to set up two continuing education programs for women. She also spent some time nurturing the development of an indigenous mission movement in Pakistan, working with them at the time of their inception to establish management and ministry structures as they worked in response to the Pakistan earthquake. Pakistan Mission Society is a leading Christian organisation in the country today.

Cathy also worked in Egypt, serving with the Coptic Orthodox Church in one of its Upper Egypt Diocese in community development, as well as in the start of a retreat centre, Anafora, outside of Cairo. She continues to be involved there today having brought together a partnership between Interserve, Eastern College and Anafora to offer a Masters in Transformational Development in the Middle East and North Africa Region.

After completing almost nine years as part of Interserve’s International Leadership Team, first as Regional Director for the Arab World and Africa, and then as Director of Ministries, Cathy stepped down from that at the end of 2014. In 2015 she partnered to launch two new initiatives for reaching women who live under Islam, When Women Speak … and Women of the Well.

When Women Speak... is a network that encourages the exploration of the place of women’s voices where Christianity, Islam and missiology meet. The network encourages women to share and debate their work on mission, women and Islam, focussed on nurturing ministry that engages Muslim women with the gospel. As part of Women Women Speak …, the Vivienne Stacey Scholarship was launched to encourage women who live where Islam is dominant to pursue higher scholarship so that they can be equipped for ministry in their contexts. Cathy has collaborated to develop online learning for women engaged in cross-cultural ministry among Muslims.

Women of the Well is engaging with Muslim women by creating a space where Christian and Muslim women can explore issues of life and faith in today’s world. This space can be academic, through social media, justice and advocacy, business and coaching. It is exploring new initiatives that engage women calling for change from within Islam, activists tackling the social issues that challenge Muslim women, and women seeking faith within resurgent expressions of Islam.

Cathy has a degree in Arabic and Islamic studies, and her PhD explored women’s activism in Pakistan and the ways women engage for change. She presently lives in Brisbane.

Cathy teaches as part of the online SMBC Master of Intercultural Studies (MICS).