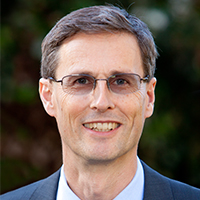 “Gripped by God in his youth, Richard gave himself wholeheartedly to the task of reaching out to those without an opportunity to hear of Jesus. Full of encouragement, ever positive, loving action and adventure, yet an outstanding scholar, Richard modelled how to live life abundantly.
His race is well run, he has passed the baton on. He has gone to collect his crown and to join the crowd of witnesses cheering you on.” – Evelyn Hibbert

Richard studied medicine at the University of Sydney (1982-1986) before working as a doctor in the Wollongong Hospital system. He was a missionary and church planter in the Middle East and Bulgaria (1989-2001) and then took up the role as International Director for Equipping and Advance with WEC International (2002-2009), which involved providing missionary teams with on-the-job training. Richard was a visiting lecturer at Worldview College of Intercultural Studies (2005-2008) and at SMBC (2007-2008) before taking up the role of Director of the SMBC Centre for Cross-Cultural Mission in 2009.

Richard is married to Evelyn and they have two grown-up children and one grandchild. They are members of Links House Church, Auburn. Richard enjoys walking in mountains and spending time with friends from many cultural backgrounds.