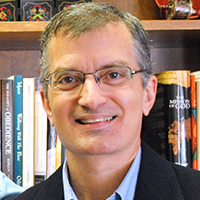 Director of the Centre for Cross-Cultural Mission, Head of Missions

Ed, in his role as Director of the SMBC Centre for Cross-Cultural Mission, seeks to ensure that all college programs reflect SMBC’s passion for God’s mission. He strives for innovation and excellence in all mission training and builds mutually constructive relationships with mission agencies. He coordinates the cross-cultural college mission teams, oversees the biennial college Missions Week, and lectures in several missions units. Ed also leads a college fellowship group with his wife, Kathy.

Ed worked in Nuclear Power for the U.S. Navy for 6 years (1982-1988). After completing his military service, Kathy and Ed went to Columbia International University to prepare for missionary service. Before departing for missionary service, Ed served as an Intern to the Missions Pastor at The Chapel, in Akron Ohio (1991-1992). Ed and Kathy served for 14 years with WEC International in church planting and field leadership in a Central Asian country (1993-2007). During this time he also served in WEC’s International Department for Equipping and Advance (2003-2004) and as a visiting lecturer at Cornerstone Bible College for Mission Training in the Netherlands (2004-2007).  After returning to the U.S., Ed worked as the Missions Pastor at Cherrydale Baptist Church located just outside of Washington D.C. (2007-2021).

Ed is married to Kathy and they have a daughter, son, daughter-in-law and grandson. Ed enjoys long walks and reading missionary biographies with Kathy, playing backgammon with his children, eating food from different countries, and playing basketball.