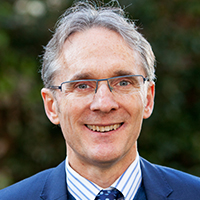 As part of the Christian Thought team, Rob lectures in theology, ethics and music ministry units.