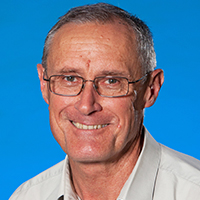 Alan taught high school mathematics for two years (1975-76), and then studied at Moore College (1977-80). He served as assistant minister at Turramurra Anglican (1981-82), and then at Willoughby Anglican (1983-84). Alan, studied at St Andrew's Hall Melbourne (1985) in preparation for serving with CMS, and then taught at St Philip's Theological College, Kongwa, Tanzania (1986-92). He is also Adjunct Senior Lecturer in the School of Humanities, University of New England as well as a member of the International Association of Papyrologists.

The manuscripts of the New Testament and other early Christian papyri, as well as reading the Gospels in their first century context

Alan attends Croydon Anglican Church, and is married to Wendy, with five adult children (and ten grandchildren). He enjoys reading detective stories, especially Father Brown, Poirot and Rumpole of the Bailey, as well as walking, country driving, and being with his family.