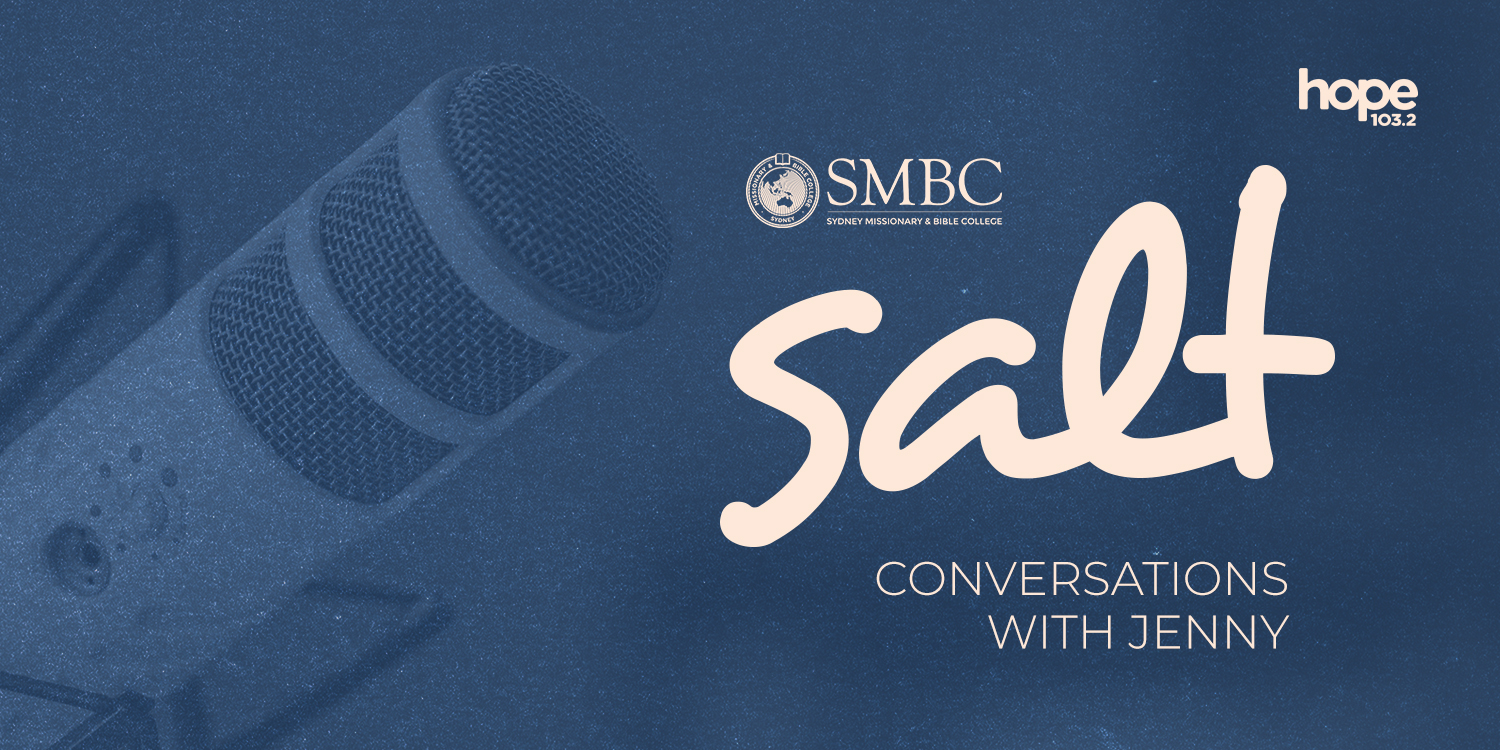 Join Jenny Salt as she takes you deeper into the lives of 'ordinary' people with heart warming, sometimes challenging and always distinctive gospel stories.

We've teamed up with radio Hope 103.2 to deliver these seasons of SALT. Where possible, we'd love you to leave a review to help spread the word! (If you'd like to financially support the production of SALT we'd love to hear from you. Please email Greg Swanton, SMBC Chief Operating Officer, or phone 02 9747 4780.)

2. Copy the following feed URL and paste it into your podcast program:

This episode Jenny introduces us to missionary and author, Naomi Reed.

Naomi has penned ten books, but never saw herself as a writer.

First and foremost she was a physiotherapist, and that trade took her to the heights of the world and hundreds of faith stories.

This episode Jenny crosses to the wrong side of the tracks to meet Wayne Pickford.

Wayne is the minister of what many might call 'the church of hard knocks', with unemployment, poverty, domestic violence and lots of colourful characters all part of its community.

But overriding all these social issues is the beauty of lives transformed by the gospel of grace.

Jenny Salt has the pleasure of introducing her listeners to a very creative young man, Jerrah Patston.

If you were to imagine a ray of sunshine embodied as a person, Jerrah is your man.

Jerrah lives with autism and intellectual impairment. He's also a composer, community musician, a valued member of his local church and, all up, a fun guy to be with.

Meet Leonie Menzies, a woman whose childhood stretched across multiple cultures and continents, who uses her hard-won lessons to help a whole new generation of children.

Leonie's early childhood was spent in the beauty of the French Alps, and the noisy hustle and bustle of Niger and Nigeria.

It was also marked by a series of hellos and goodbyes, and a grief and loss that actually resulted in her becoming a person of hope - hope which she now offers to those whose lives seem hopeless.

Jenny does a deep dive into the life of David Whalley, a Christian man who knows what it feels like to hold a beating heart in his hands.

David began his life as a hyperactive child when medicine barely understood what that was.

Who would have thought that, as an adult, he would embark on a medical career that would lead him to navigate the pathways of the human heart?

Tune in to hear Jenny Salt chat with Derek Brotherson, the Principal of Sydney Missionary and Bible College.

The pieces that make up his life are a strange fit – music, law, theology – sounds a bit like a medieval monk.

But rather than being sequestered away, Derek's desire to serve took him to South East Asia and a difficult-to-reach majority religion.

Tony is a man overflowing with excitement and enthusiasm for the path God has led him down - including the journey that led him to discover an underground forest.

Some who've crossed paths with Tony have called him crazy. But if he is, he’s crazy about Africa, the environment and God.

Jenny's guest in this episode is James Lane, a man charged with bringing the Gospel to sceptical teens.

James has made a mission out of talking to our High School kids about Jesus – something that would scare the life out of most of us.

But his greatest struggle was an unexpected unravelling of his life that left him gasping for grace.

In this episode, Jenny introduces us to Elizabeth Spencer, an everyday woman whose family life is a tribute to God’s amazing grace.

Elizabeth has found deep and abiding love – not once, not twice, but three times in her life.

Two husbands, both with significant challenges But above and beyond them, a Lord who will not let her go.

Kicking off Salt Season 7, Jenny introduces us to the CEO of Anglican Aid, Tim Swan.

From his earliest years, Tim had a sense that God had a plan for him.

It began with music, moved into mission, and has brought him to a place where he now gets to meet tens of thousands of new Christians every year.

You can see all of the projects Tim is involved in by visiting the Anglican Aid website.

For the finale of Salt Season 6, Jenny introduces us to Anthony Brammall.

Anthony's experience of God's grace at a young age took him and his family to an unpredictable and sometimes dangerous country. There, he spent years in cross-cultural ministry learning how to introduce the gospel to people dedicated to an array of alternate religions.

But his continuing scholarship would later lead him to tell another story entirely.

Anthony's reality of going to a risky and unpredictable place is wonderfully mirrored in his latest book about Mabel Green, a young Sydney woman who declared her desire to go where God would have her - and never went home.

You can purchase a copy of Anthony Brammall's book, Never Going Home, at the SMBC online bookstore.

Jenny Salt speaks to Emily Maurits about her sister's life-threatening condition that first left her helpless, then led her - despite all her questions - to a greater trust in the goodness of God.

Emily grew up in a Christian home, loving to read and with a passion to write. What she ended up writing about, though, was something she would never have wished on anyone.

Her first book became an endearing story about two sisters and a brain tumour.

If you are interested in reading more about Emily and Jasmine's story, you can purchase a copy of Two Sisters And A Brain Tumour here.

Jenny's guest in this episode is Kathy Notley, who shares what it is like to go searching for the family you've lost and find a stronger connection than you ever thought possible.

Kathy's childhood was idyllic - a close family with loving parents and so many memories of family holidays, playing with neighbours, and a home that everyone wanted to visit.

Then, at 17 years of age, her world fell apart. Her family, once close, was shattered and scattered.

And so the search began for Kathy to somehow fill the void and recreate what she had lost.

In this episode, Jenny Salt takes us into the life of Sharon Hall, a self-effacing woman whose life is a testimony to what God can do with a willing pair of hands.

Sharon grew up with an open-air preacher for a dad and a piano-accordion-playing mum, and God was always a big part of her childhood.

She dreamt of going to Africa as a missionary teacher, but God had other plans and took her to green hills on the other side of the world.

And when she finally came home, it was to receive the family she never expected.

Jenny Salt introduces us to Geoff Harper, a self-effacing Irishman with a love for the last book of the Bible most Christians get around to reading.

Geoff grew up an evangelical in a country steeped in catholicism. One thing he was certain of, his life would not be one spent in ministry.

But God had other ideas, and when Geoff found his true path it was a journey into the heart of the Old Testament.

There, Geoff would discover a life-long love for the book of Leviticus - a passion that would literally save his life.

Jenny Salt is joined by Alison Chambers, a mother to three adult children, a wife to a cardiac specialist, and a trained physiotherapist. But just those details wouldn't be enough to know her. Alison is an actor with a capital 'A'.

As a child, Alison dreamed of acting and it became a driving motivation for most of her life. It's taken her on to the stage on countless occasions and into the storylines of many well-known Australian television dramas.

But the acting profession is a challenging one and Alison has had to constantly ask herself, “What does God want from my performance?”

You can find out more about Alison's theatre company, Joining The Dots, here.

Jenny Salt meets Linda Chan, whose parents grew up under the turbulent and cruel regime of Cambodia's Khmer Rouge.

They came to Australia hoping for a better life, but for Linda, turbulent and cruel is how she describes the childhood that followed.

A troubled home life, school bullying, and third-degree burns to 90% of her body combined to make her life a complete misery.

But when Linda discovered the love of Jesus as a teenager, she found an answer for her brokenness.

Jenny meets Michael Duckett, an indigenous man who has given his word to follow God and sees no reason to take it back.

Michael’s life could be summed up in one word: reconciliation.

Moving in and out of a foster home as a baby and toddler he was adopted by his white foster family who raised him and cared for him as their own.

But it took hearing a “boring” sermon at the age of 17 for Michael to truly understand his identity and what it means to be reconciled to God.

Jenny Salt talks to Dr. Justine Toh, a Senior Research Fellow at the Centre for Public Christianity, where she speaks and writes about deciphering contemporary culture.

Justine shares how she grew up in an immigrant culture that made an idol out of education and measured success in terms of career benchmarks.

Her book, Achievement Addiction, examines our need to succeed, and her own struggles in setting this mindset aside. As a Christian, she now draws her identity from what God has done, rather than anything she can add to the ledger.

Ed Grudier tells Jenny Salt he did not expect God to lead him to more than a decade of ministry in Turkey, testing the tempers of the police as he sought to plant a church.

Ed started his life in the middle-class suburbs of Cleveland, the so-called Bible-belt of the US.  But despite growing up in a culturally catholic household, he still managed to hold on to a secular outlook.

Yet, a single sermon at the age of 18 set him on a path that has taken him all around the world, powered by the conviction that all people need to hear the gospel.