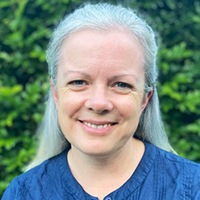 Peggy grew up in the Blue Mountains, and from her teenage years onwards had a keen interest in global missions. Not knowing what God had in store for her, Peggy studied physiotherapy at university in the hope that it might be a pathway to cross-cultural work. While studying, she met Tim, and they married in 1999.

Peggy worked as a hospital physiotherapist for 8 years before resigning to care full-time for their children. While working, she specialised in women’s health physiotherapy and trained as a Childbirth and Parenting Educator. Through her years as an at-home parent, Peggy continued in her educator role and now she continues to find educating and journeying with first-time parents to be a great joy and privilege. After a short stint as an English Language tutor, Peggy now spends 2 days a week as a community physiotherapist, working with older people in their homes.

Peggy has been part of the SMBC community since 2007 when Tim commenced lecturing. Over the years, she has had varied involvement in college life including mentoring students, participating in prayer triplets, contributing to SMBC Wives events and helping to co-ordinate the SMBC Mums Bible study.