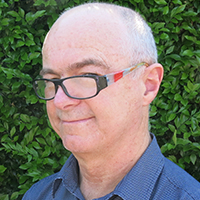 Jonathan worked as a small and then large animal veterinarian in Australia before undergoing theological and linguistic training to prepare for reaching pastoralists. He then moved with his family to East Africa for thirteen years, mostly serving as part of a church planting team among an unreached group of cattle-herders. After returning to Australia, Jonathan resumed veterinary practice part-time, while serving Canberra churches in missions education/mobilisation, before pursuing further theological studies. He has taught full-time at SMBC since moving to Sydney in 2009.

Missions - particularly the integration of word, deed and character in our making God known to the nations, including the least-reached nomadic peoples of the world.

Jonathan is married to Barb (also a graduate of SMBC) and they are blessed with two adult children, a daughter-in-law and two young grandchildren. Besides spending time with their family, they enjoy exploring God’s creation by foot, cycle, sail and snorkel, as well as belonging to Campsie Baptist Church.